It takes months of meticulous rehearsals at the AIDA Entertainment studios to prepare the spectacular shows on board the AIDA ships. hamburg cruise mag was invited backstage. 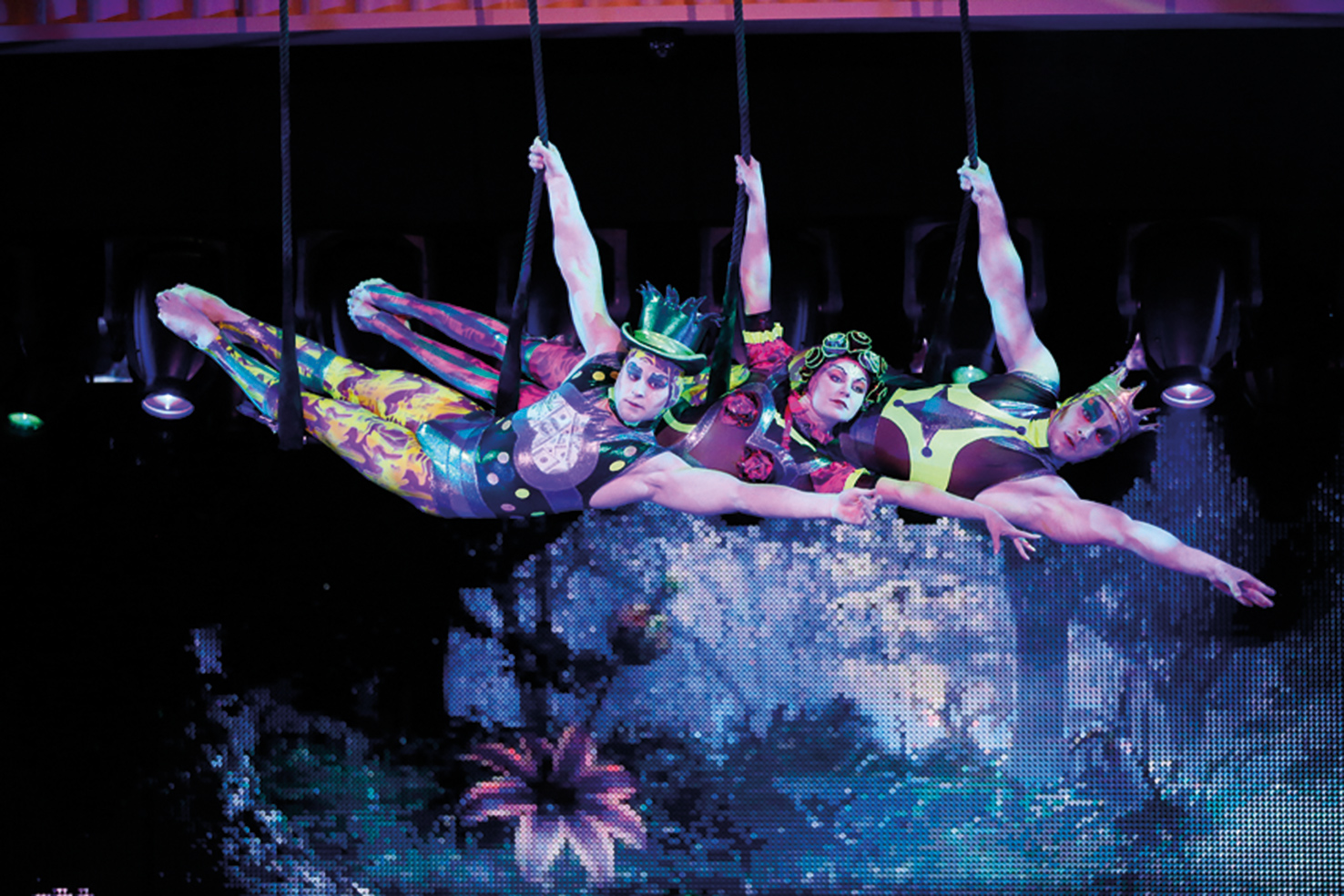 Entertainment? Few words are so closely linked to the name AIDA: since the line first started operating, entertainment has been a key element in the AIDA vacation experience.
“Not too soft, please, gentlemen!“ With a flourish, Holger Kolodziej raises his arms from behind the piano. “More effort!”, he says, encouraging the male performers of the ensemble during the vocal rehearsals, and asks the female artists to take the high C down a little. Andrew, James, Bart, and Briony, Déanna and Marika nod, swipe the sheet music on their iPads back to the beginning, take a deep breath and start off again. Kolodziej, musical director for the six AIDA soloists, taps his feet and looks happy. Not that his students are free to go yet – they run through the number several more times. The young entertainers horse around a bit to let off steam, but instantly snap back into professional mode until the song is perfect.

We’re at a vocal rehearsal in a beautiful old school building in Seilerstrasse, a side street of the Reeperbahn in Hamburg’s legendary red-light district. The former school is now the main office of AIDA Entertainment, the division of AIDA Cruises set up in 2001 to develop the entire on-board entertainment programme for the AIDA fleet.

Entertainment? Few words are so closely linked to the name AIDA: since the line first started operating, entertainment has been a key element in the AIDA vacation experience. Six years ago, Borris Brandt, the former director of programming for Pro 7, joined the company as managing director of AIDA Entertainment and is now responsible for the entire show programme on board all twelve AIDA ships. He oversees a team that creates around 83 formats with 570 performers every year – an immense task. As well as popular quiz shows like Who Wants to Be A Millionaire?, The Voice of the Ocean – a version of the TV show adapted for the AIDA fleets, rock concerts and big-name guest artists, the shows specially written for AIDA are the centrepiece of every cruise.

These shows combine singing, dancing, acrobatics and elaborate costumes. What looks so effortless on stage is actually the result of months of hard work at AIDA Entertainment by a creative team that includes production management, artistic direction, choreographers, directors, costume and stage designers, composers and music producers, lighting designers, sound engineers and script writers. Before any show makes it to a stage on board, providing guests with a superlative experience, it is produced here, studied and honed to technical and artistic perfection.

Each member of the AIDA ensemble performs in several shows, meaning that the talented performers also need a high degree of skill and versatility. AIDA has a huge demand for good artists and now recruits by holding auditions all over the world, including New York, Montreal, London, Hamburg, Kiev and Amsterdam.

Bart Mijnster joined AIDA after a casting in Amsterdam. He’s been under contract to AIDA since the beginning of March and is delighted to be part of the entertainment team – it’s also his first time on a cruise ship. The Dutchman is a show business pro: after doing a degree in Leisure Management, he spent 12 years working for a company that develops and produces plays, shows and TV formats. During this time, he did everything that AIDA does on a larger scale: writing scripts and songs, designing costumes, producing shows. 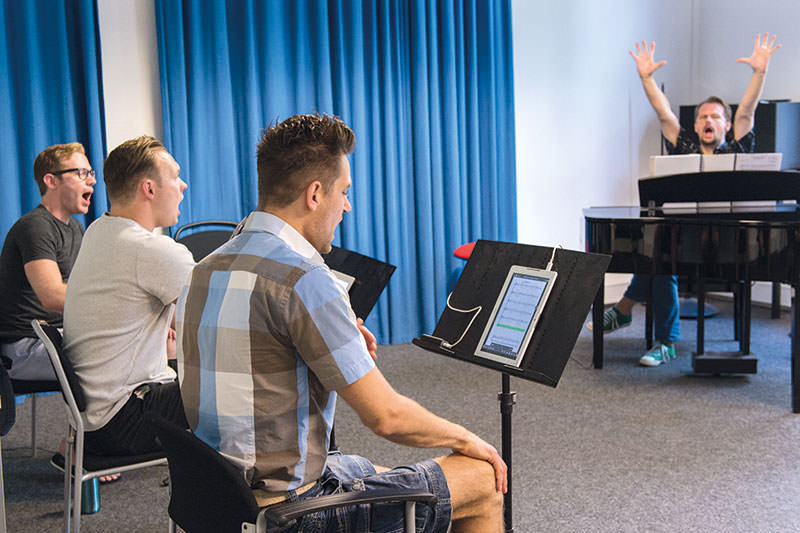 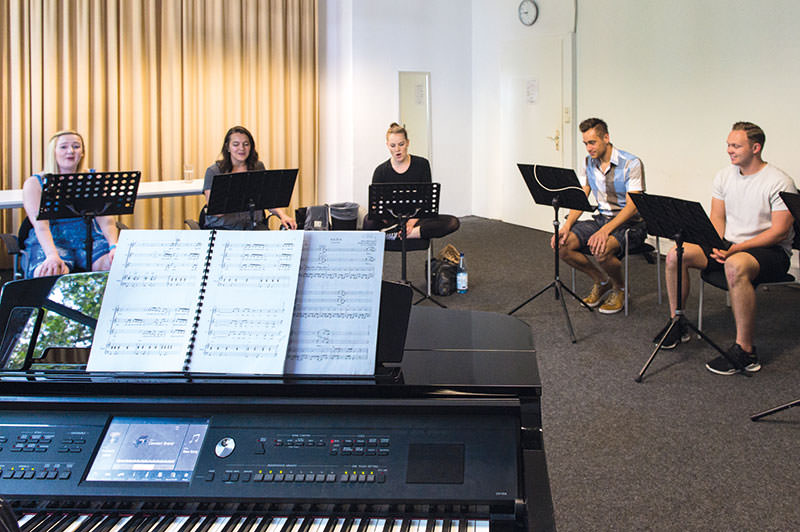 “The singers and dancers practice their show repertoire separately, and later, at the ‘put-in’, everything is fused together to form the show.”
Despite all these background skills his main job as a member of the AIDA ensemble is singing. Although he took singing lessons for many years, the 32-year-old never really pursued a career as a vocalist – until suddenly one day in his theatre group he found himself in the main singing role, covering for a sick colleague. “I really jumped in at the deep end”, says the affable Dutchman, “but everything went smoothly, and I discovered a new passion.” Happily, as a “mover”, he doesn’t have to dance. So what’s a mover? “The vocalists in a show receive tuition in dance steps, elegant glides – what we call movements – so that we don’t look too stiff next to the dancers”, explains Bart. And that’s the class he’s heading to this afternoon.

Movements, choreographies and acrobatics are all rehearsed in the scarlet building just down the road, which was built four years ago. The building’s 4,360 square metres spread over seven floors are packed with rehearsal rooms and stages, all equipped with the latest technology. The rehearsal studios, which are almost as big as gymnasiums, have the AIDA stages outlined on the floor. “Each movement, each step, every position is spot on – these people are all consummate professionals”, says Melanie Sievers, Manager Entertainment Communication at AIDA. “The singers and dancers practice their show repertoire separately, and later, at the ‘put-in’, everything is fused together to form the show.” 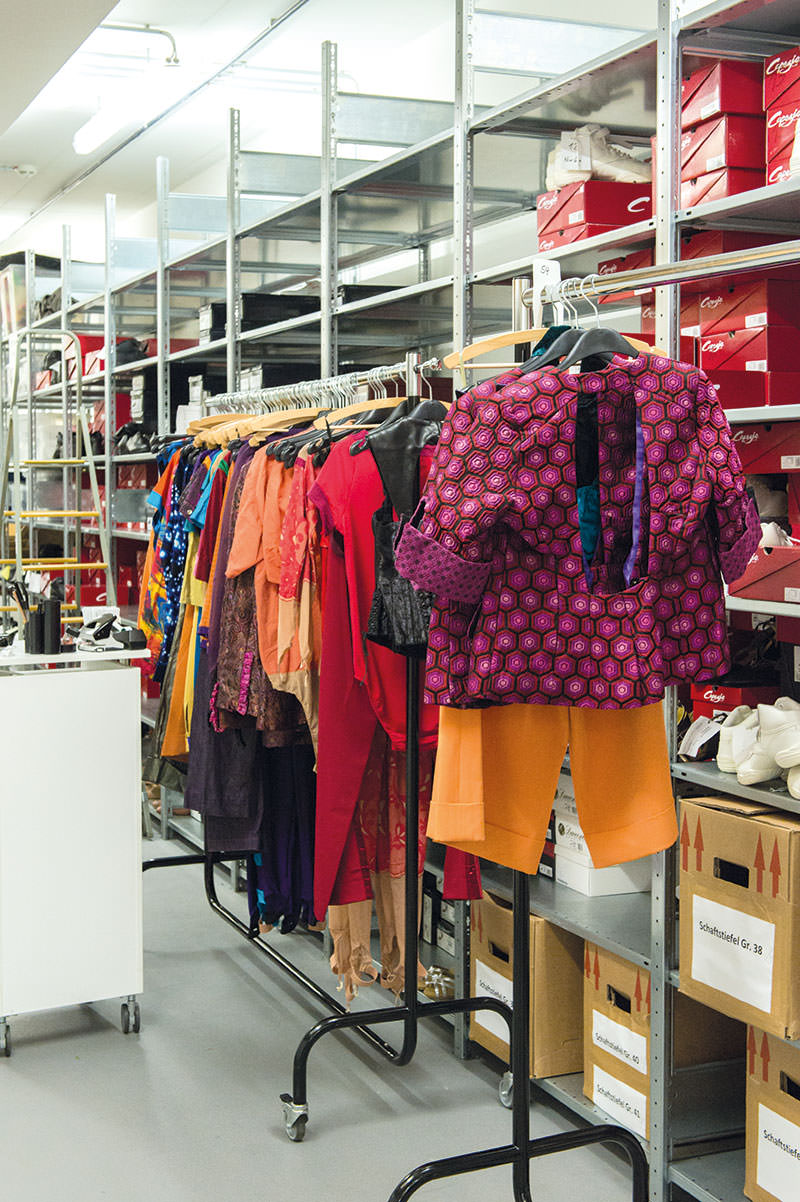 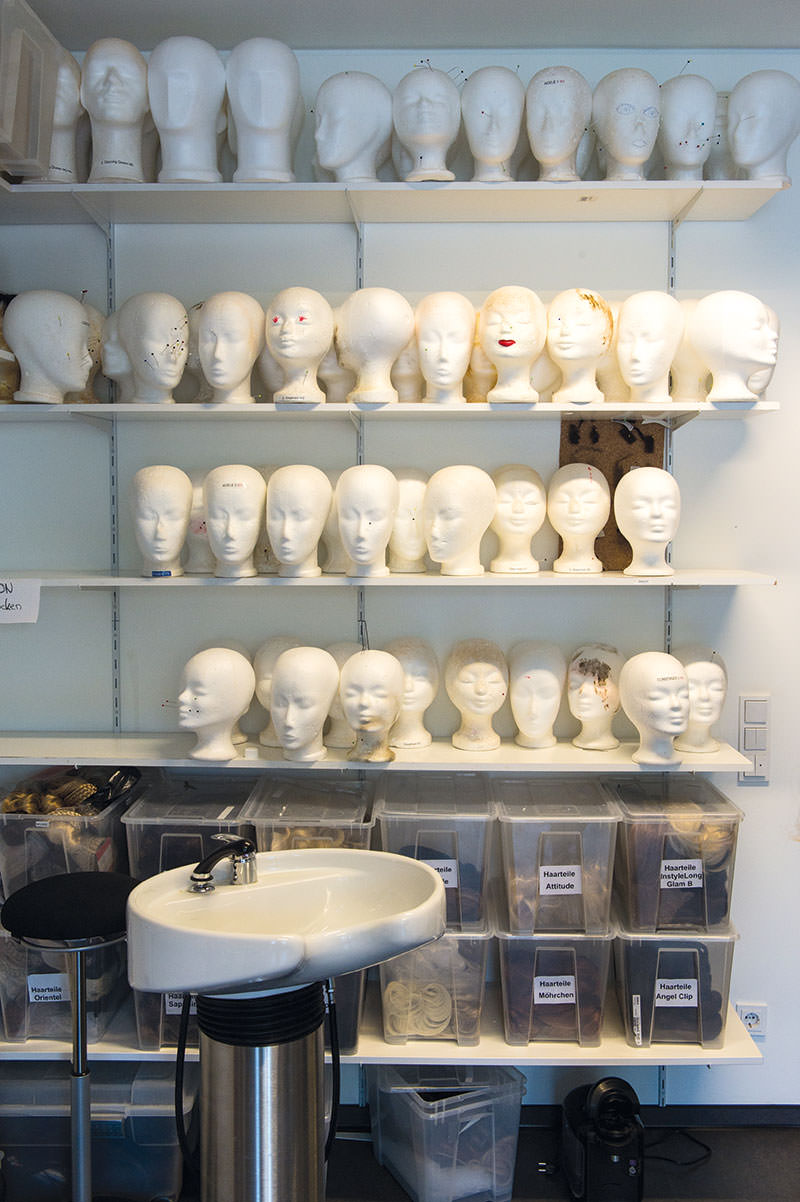 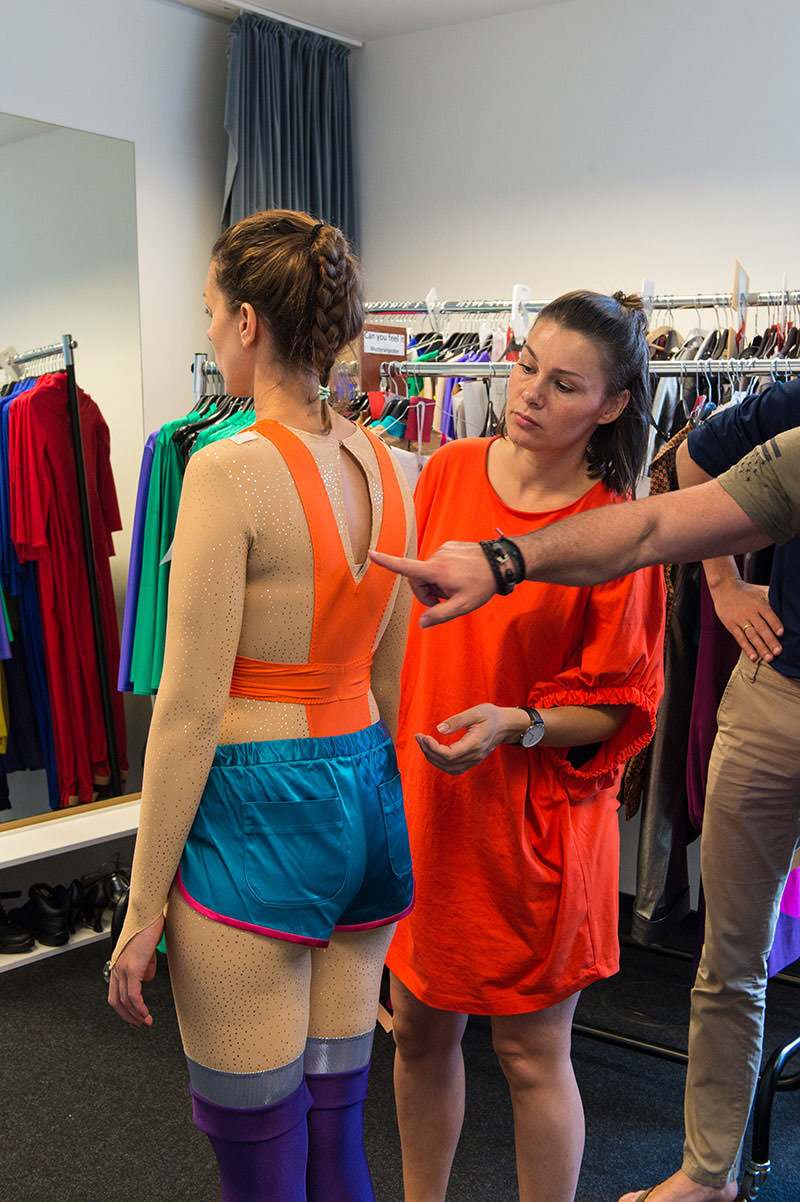 The average time needed to put on a show, starting from the initial idea, is between eight and ten months. The creative cogwheels of AIDA Entertainment start turning long before it becomes part of the AIDA repertoire. One of these many cogs is costume design and production. As soon as the show concept has been approved, Michael Berndt, Manager Costume Development at AIDA and responsible for pattern and prototype development, is given the figurines and the design sketches for each individual role. A prototype is designed for each costume. “Before we start serial production”, says Berndt, “we perfect each outfit down to the smallest detail in the fittings.” The costume’s appearance and functionality are what counts, he adds. “The artists have to feel comfortable in their outfit and be able to move freely.”

The costumes also have to be well made, able to withstand considerable wear and tear, and are designed to be changed with ease and at great speed. Performers come and go but the costumes remain, meaning they also have to be adjustable. For example, the trousers are designed to allow the knees – which tend to wear out during the rock’n’roll shows – to be easily replaced. “This saves time and material”, says Berndt. Most costumes are usually discarded after six years at the latest, which is also the average lifespan of a show.

For the aerial acrobats it is essential that their costumes fit like a second skin. Watch them flying through the air in the spacious rehearsal room with its vast corner windows, and you soon realise why. Suspended several meters above the ground, the AIDAprima artists, who come from Ukraine, Cambodia and the USA, perform their heart-stopping acrobatics using silks, ropes and trapezes, seemingly unbound by the laws of gravity. The power and the ease with which these five gymnasts move are truly astonishing. Each grip, each twirl in the silk and each plunge has to be absolutely perfect, and there is no margin for errors. There’s no safety net or line – the artists depend solely on their body control and skill. Ill-fitting or baggy costumes could present a great risk.

There are only four weeks left before the ensemble artists of the AIDA fleet – who are called the AIDA stars – board the AIDAprima. Four weeks left to rehearse their performances, songs, dances. “We have exactly one week to study and rehearse each show”, says solo singer Bart. In four weeks they’ll be standing on the Theatrium, which is the large stage on the AIDAprima. Today, they’re focussing on the emotion-laden final song in the big welcome show. After an hour-and-a-half of rehearsals, the six soloists go through the closing number and Holger Kolodziej is finally satisfied. “Very nice”, he praises their performance. It is also very moving, despite the plain surroundings of the rehearsal room. On a proper stage, with spotlights, glamorous costumes and a lavish stage set it will be simply overwhelming: a show that gets feet tapping and sends shivers down your spine. And that, as Borris Brandt says, is exactly the effect a good show should have. 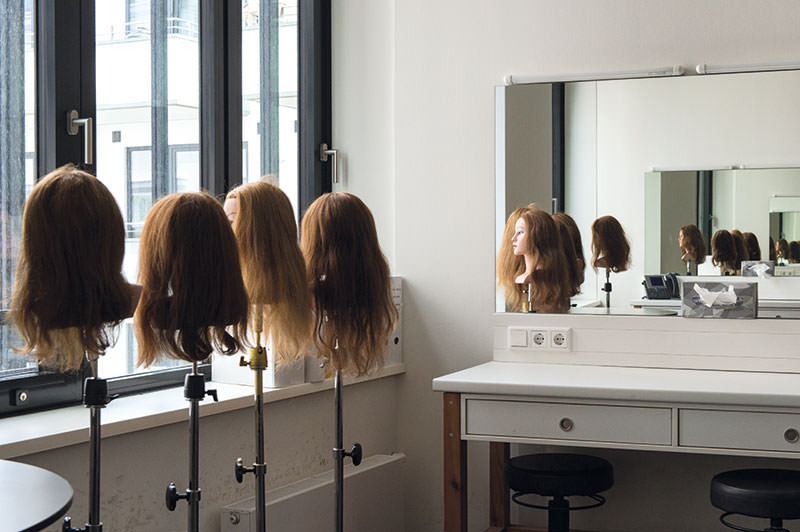 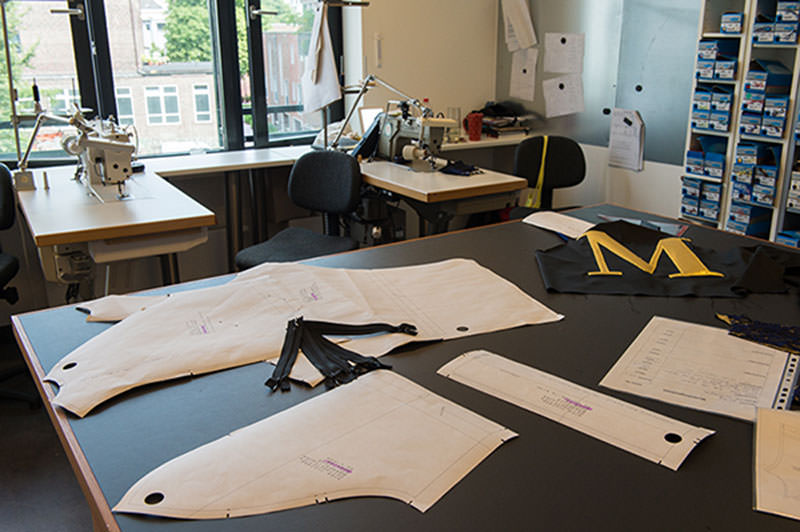 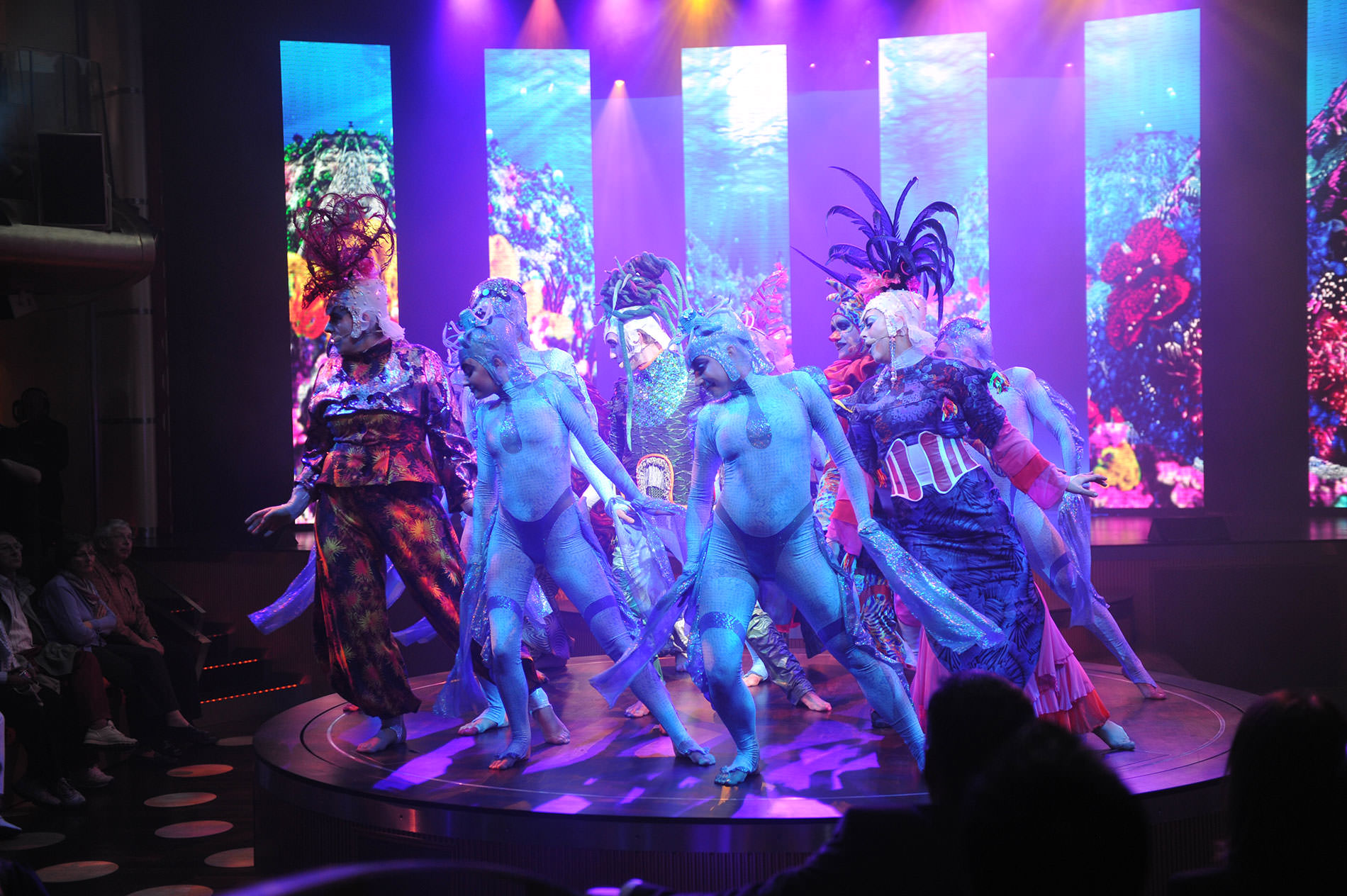