Following in the footsteps of great explorers adds an exciting twist to a cruise. We look back at the daring heroes of the oceans – and invite you to recreate their journeys, but with all mod cons! 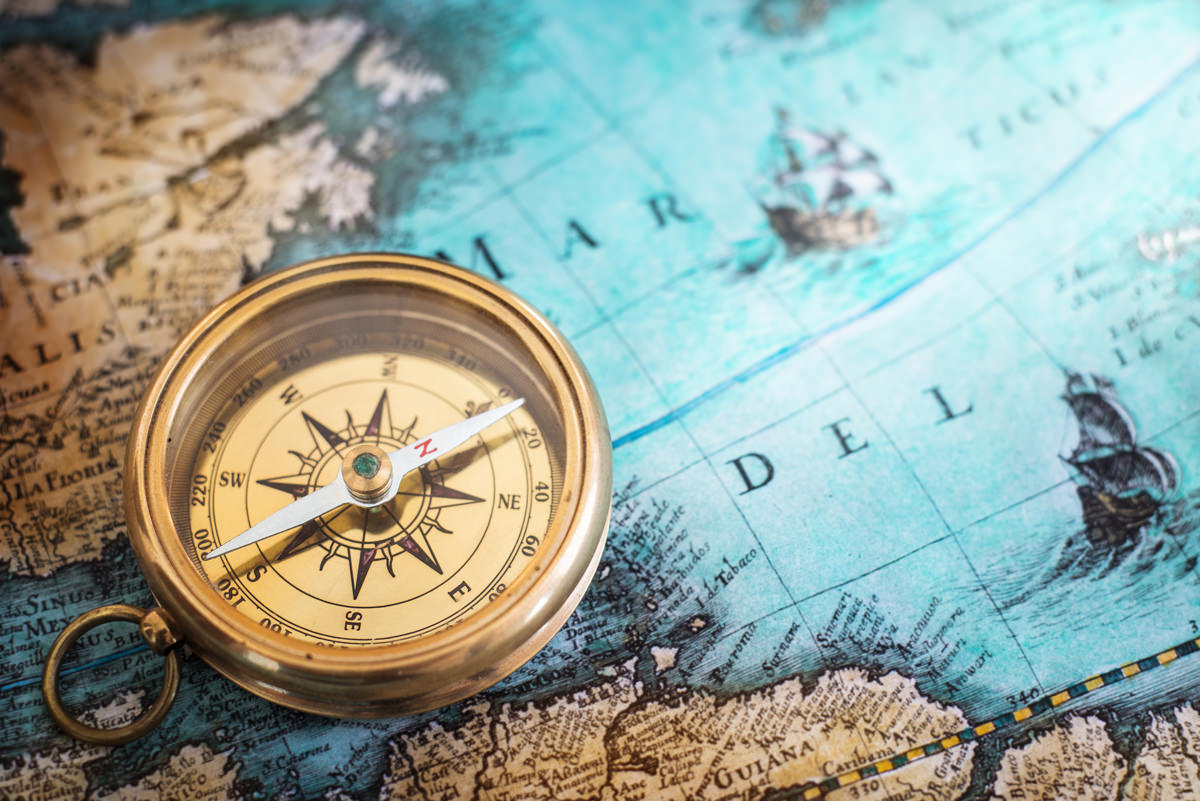 Icelanders are always good for a surprise, as they recently demonstrated with their impressive performance at the European Cup in 2016. So it is unsurprising that a native of Iceland, Leif Erikson, is said to have been the first European to set foot on American soil – nearly half a century before Columbus. And, to top it all, without the benefit of a map or a compass. Roughly around AD 1000, the son of Eric the Red landed on a fertile shore, which he named Vinland. As archaeologists have proven, Vinland was located in present-day Newfoundland. It is uncertain just why Leif Erikson picked this name. It may be that the name was inspired by the local berries, which reminded him of grapes. On the return trip to Greenland, the Viking managed to rescue a Norwegian merchant who had been shipwrecked on an island. This deed earned him the nickname “Leif the Lucky”. It is also very likely that another European sailed to America before Columbus: Didrik Pining, a native of Hildesheim in Germany and a captain in the service of the Danish king, is said to have set sail in 1473 and reached Labrador. 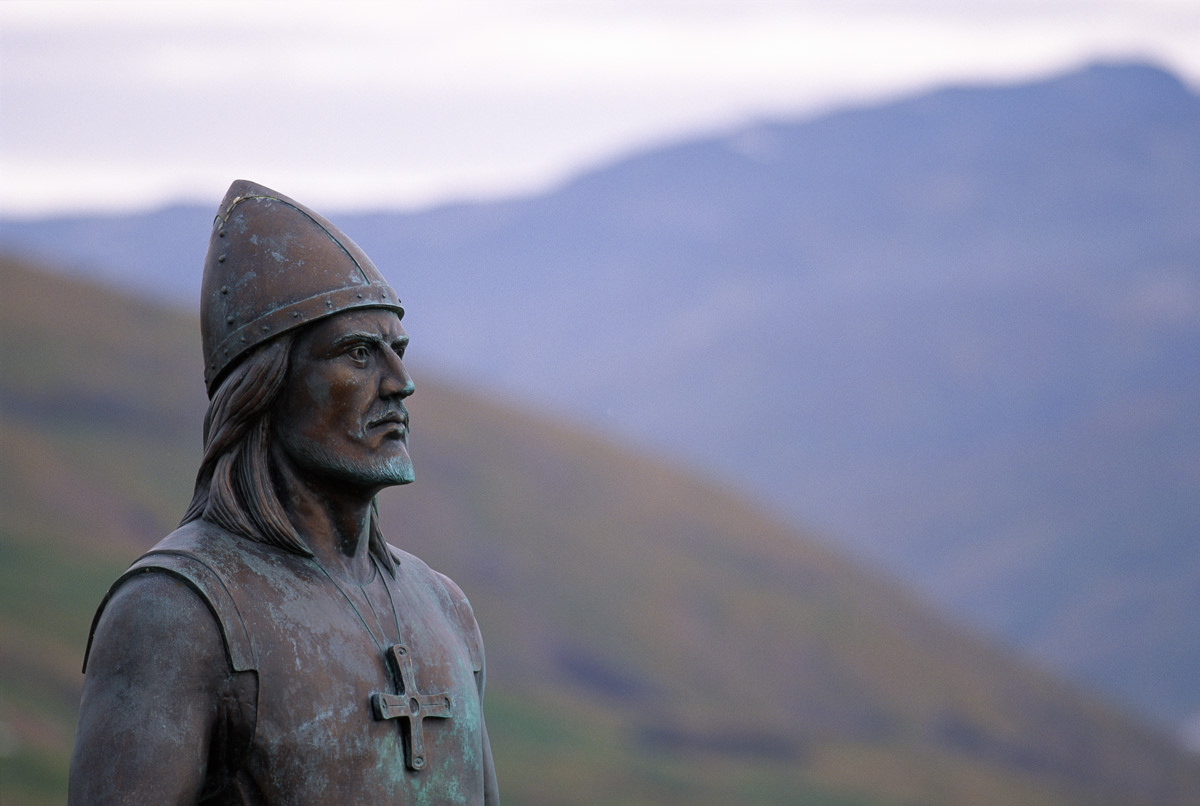 Pickled cabbage in the South Seas

Until the middle of the 18th century, the South Seas remained a region shrouded in mystery, despite the many expeditions that set out to explore it. People imagined that there was a gigantic continent there, terra australis incognita. The British explorer James Cook had hoped to discover this land on his multiple trips, but ended up proving that it did not exist. Cook was not just an explorer, but also a highly skilled cartographer and became world-famous for his pioneering discoveries. Together with the botanist Daniel Solander and the astronomer Charles Green, he mapped the transit of Venus in 1769 on the island of Vahitahi. Their observations helped astronomers calculate the distance between the sun and the earth. Cook, the son of a farm labourer, had a reputation for being a strict captain, but he always made sure his crew received generous rations. He also successfully prevented the dreaded disease scurvy, which is caused by a lack of vitamin C, by serving pickled cabbage. In fact, his provision lists are eyebrow-raising by today’s standards, including 2500 pounds of raisins, 160 pounds of mustard seed and hundreds of pints of vinegar. 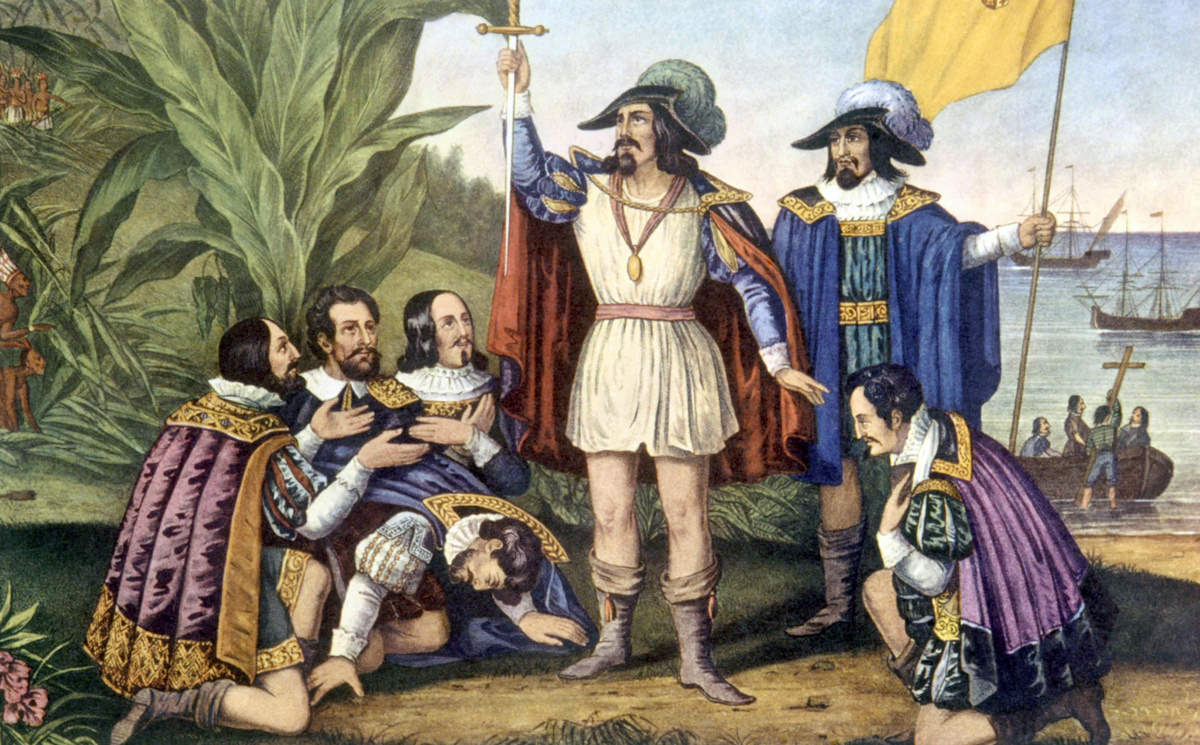 The Italian explorer Christopher Columbus, the son of a wool-weaver, had an unbridled curiosity and passion for tales of far-away countries, astronomy and navigation which made him one of the world’s most outstanding seafarers. He was looking for the western route to the riches of Asia – spices and silk – on the orders of the Spanish king when on 12 October 1492 he spotted land. The first island on which he and his crew landed was one of what are now the Bahamas. In the following weeks, he also landed on Cuba and Hispaniola. By 1504, Columbus had undertaken three most trips westward and explored the coast of South and Central America, which was a “new world” for Europeans. Columbus never realised the implications of his discovery, and until his death in 1506 remained convinced that he had found the western route to India. This assumption was proven wrong in 1522 by Ferdinand Magellan’s circumnavigation of the earth, during which the Portuguese seafarer discovered the western passage between the Atlantic and the Pacific Ocean. Magellan played an important role in demonstrating that the earth is not flat. 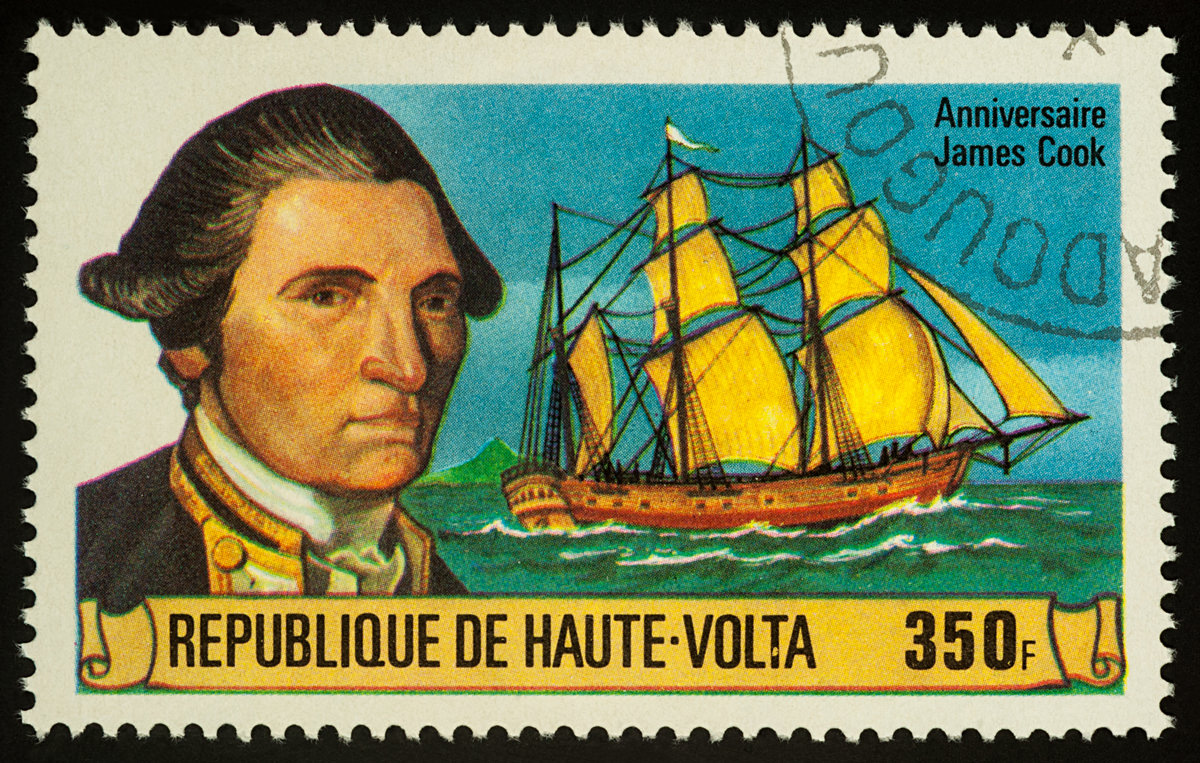 An in-depth look at the Mediterranean

Until well into the 1880s, the eastern Mediterranean had hardly been explored. The Austrian-Hungarian Deep Sea Expeditions, which started in 1890, aimed to change that. Under the scientific leadership of the Austrian zoologist and ichytologist Franz Steindachner, the research ship Pola, which was actually a cargo steamer owned by the Austrian navy, anchored at 417 pre-picked spots in the sea in order to carry out a precise survey of underwater life. The expedition also measured what was then the deepest known point in the Mediterranean, the Pola Deep south of the Peloponnese, which is is 4,404 metres deep. The expedition’s scientific results surpassed expectations: a large proportion of the specimens brought back is still held in the collection of the Natural History Museum in Vienna. Over 30 species of fish were named in honour of Steindachner, including a sea catfish. 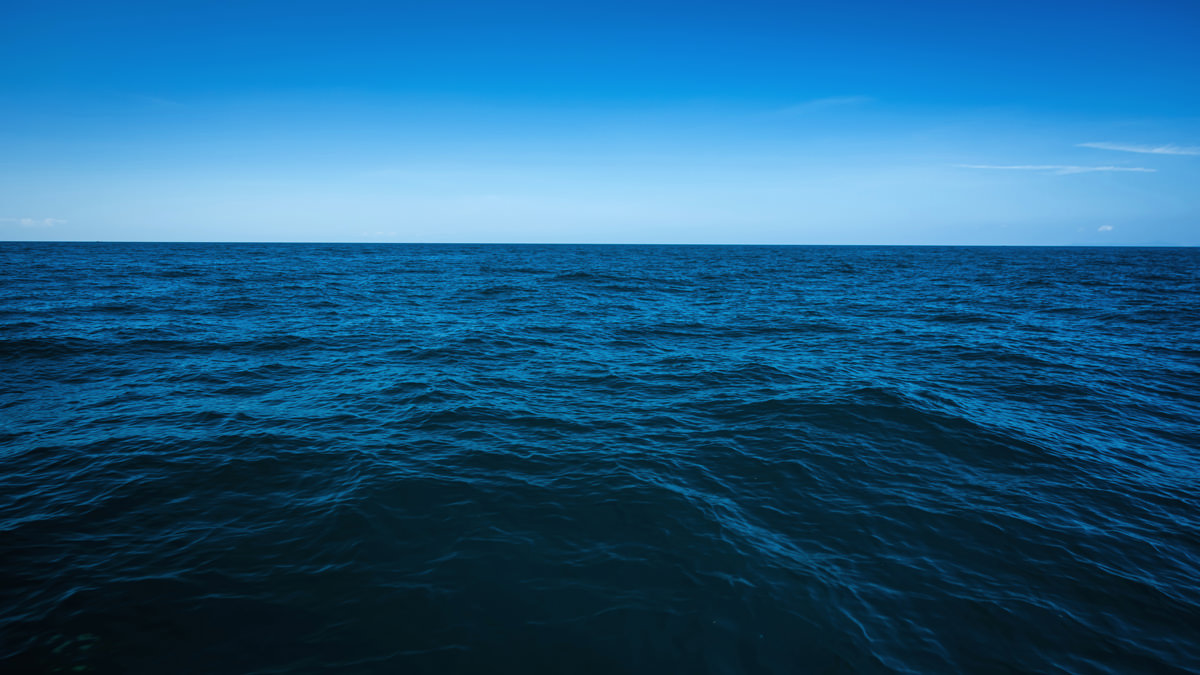 The coup at the Cape

It was in the year 1487 that the Portuguese mariner Bartolomeu Diaz set off on a secret mission for the king. His assignment was to find the southernmost point of the African coast. On his journey, he became the first European to sail around the southwestern tip of the African continent, which he – very appropriately – called “Cape of Storms”. Diaz’s discovery opened up for the Portuguese the long-wanted passageway to the Indian Ocean – and is said to have put King John II in such an optimistic mood that he renamed the storm-battered headland the “Cape of Good Hope”. It turned out to be a prescient choice: only a few years later Vasco da Gama took the Cape route and reached the Malabar coast of India. No ship’s log survives from the Diaz expedition, but thanks to a Portuguese tradition, his journey can be traced: Diaz named the places he had “discovered” after the patron saint whose name day it was. 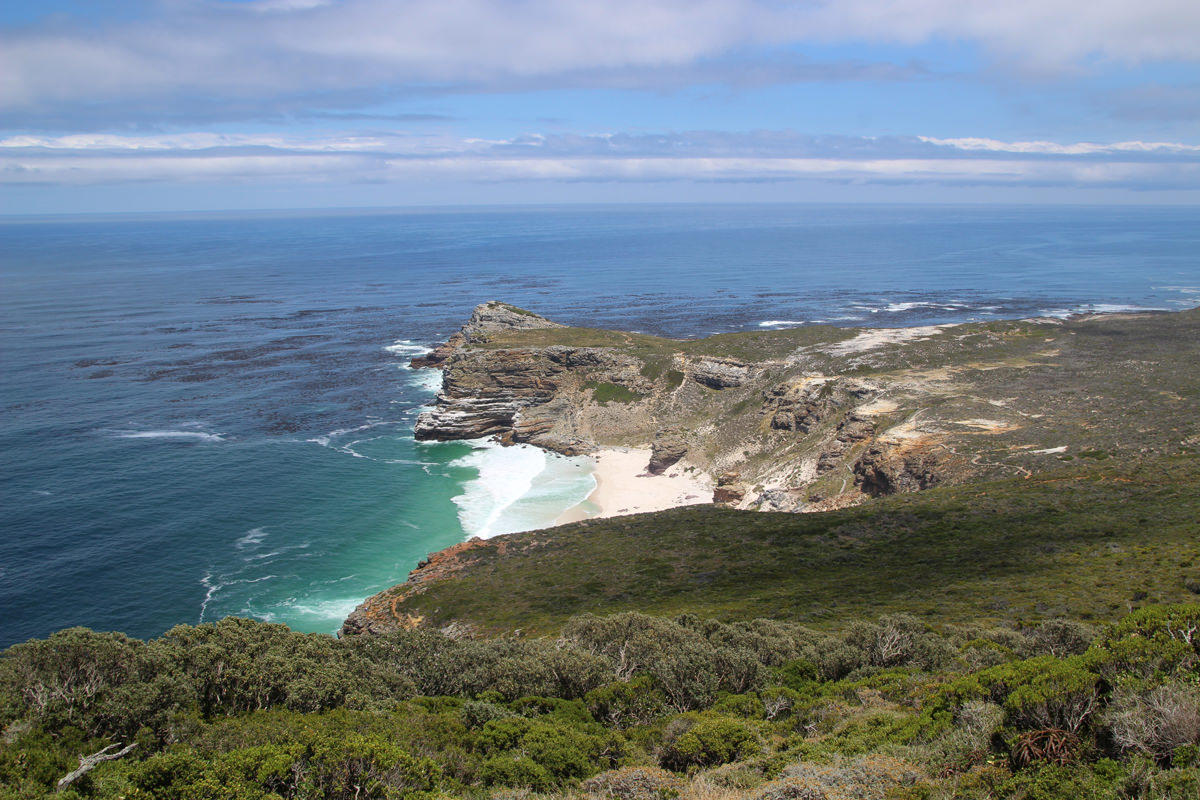 South America and a new understanding of the world

At the end of 1831, the HMS Beagle sailed from Plymouth. Its mission was to map the coastline of South America. On board as a paying passenger was a young man, whose duties included entertaining the captain. Charles Darwin, 22, an amateur naturalist, intended to use the trip to discover the diversity of creation and document it. Darwin, who suffered horribly from seasickness, made some very interesting observations on the Galapagos Islands. The indigenous finches, in particular, intrigued him: it seemed like every island had its own variety, each with a different beak shape that distinguished it from the others. This laid the foundation for Darwin’s Theory of Evolution – which went on to completely change the way people saw the world. In 1859, Darwin published his main work, “On the Origin of the Species”. He never had to face seasickness again – the observations he made during the five-year voyage on the Beagle were enough to open his eyes for the rest of his life. 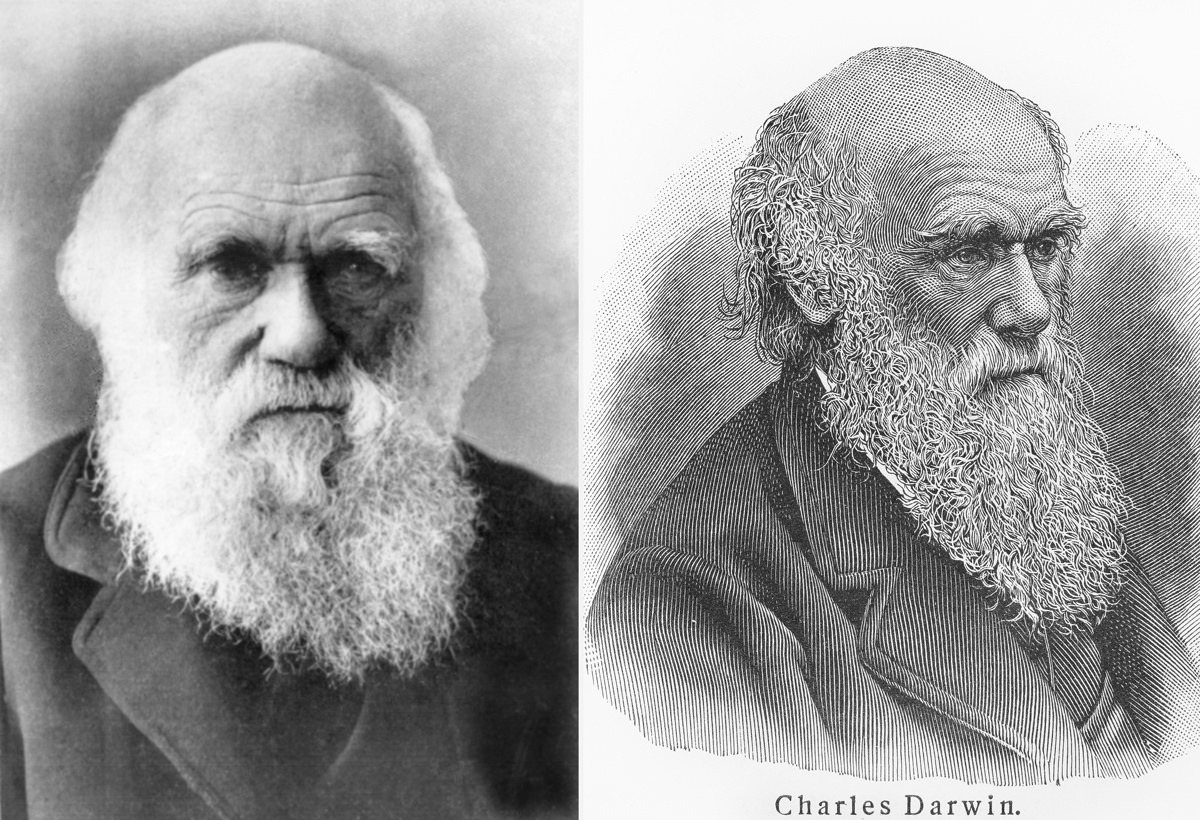 The lure of Down Under

Inspired to explore the oceans by Daniel Defoe’s novel “Robinson Crusoe”, the British seafarer Matthew Flinders went to sea at an early age. In 1801 he set off on the HMS Investigator to circumnavigate the Australian continent. Flinders’ crew included the botanist Robert Brown and the artist Ferdinand Bauer, who captured the exotic flora and fauna of Australia on paper. Flinders’ reports were compiled in a two-volume book titled “A Voyage to Terra Australis”. Practically forgotten in his native country, Flinders’s name pops up everywhere Down Under, with numerous towns and streets named after him. Flinders was literally unearthed in the UK when archaeologists found his burial place in a former graveyard close to Euston station. A lead plaque on the coffin had survived centuries underground, proving that the bones inside truly belonged to Flinders. 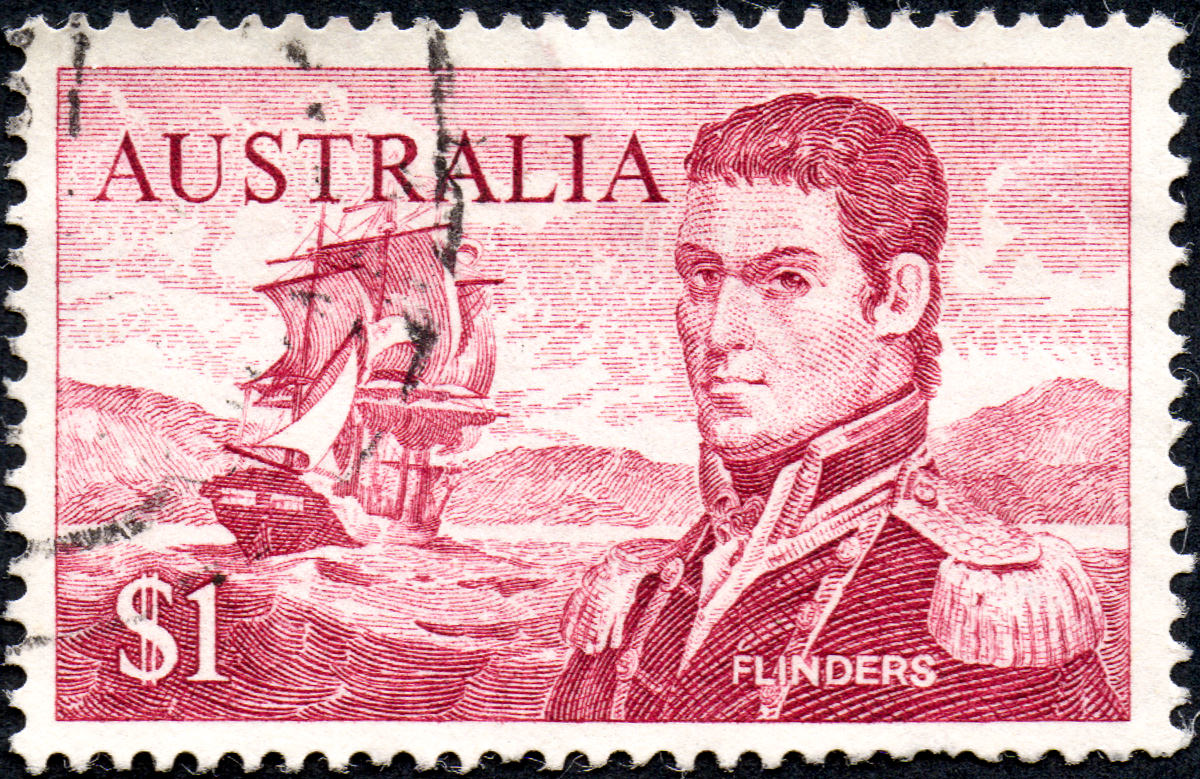 Lost looking for the Northwest Passage

In 1845, the seasoned polar explorer John Franklin, a British navigator and the nephew of Matthew Flinders, set sail with a highly motivated crew on the ships HMS Terror and HMS Erebus. His goal was to find the fabled Northwest Passage. The expedition was exceptionally well equipped, with sturdily built ships fitted with the latest technology. They had provisions for three years, and each ship had a library with more than 1000 volumes; there was even a hand-organ on board. But then the unimaginable happened: after the crew had successfully spent two winters in the pack ice, the ice failed to thaw in the following summer, which was unusually cold, and the ships could not leave their icy anchorages. Franklin died soon after and in April 1848, the survivors decided to abandon ship and set out on foot over the ice. Their attempt was doomed. Even the biggest search mission of the 19th century, which launched in 1850 and involved 14 ships, failed to find the crew. In a particularly tragic twist, the frozen ships were only a few sea miles from King Williams Land. Today, we know that this is an island and that in summer the ice on the east side melts – forming a channel that is part of the Northwest Passage. 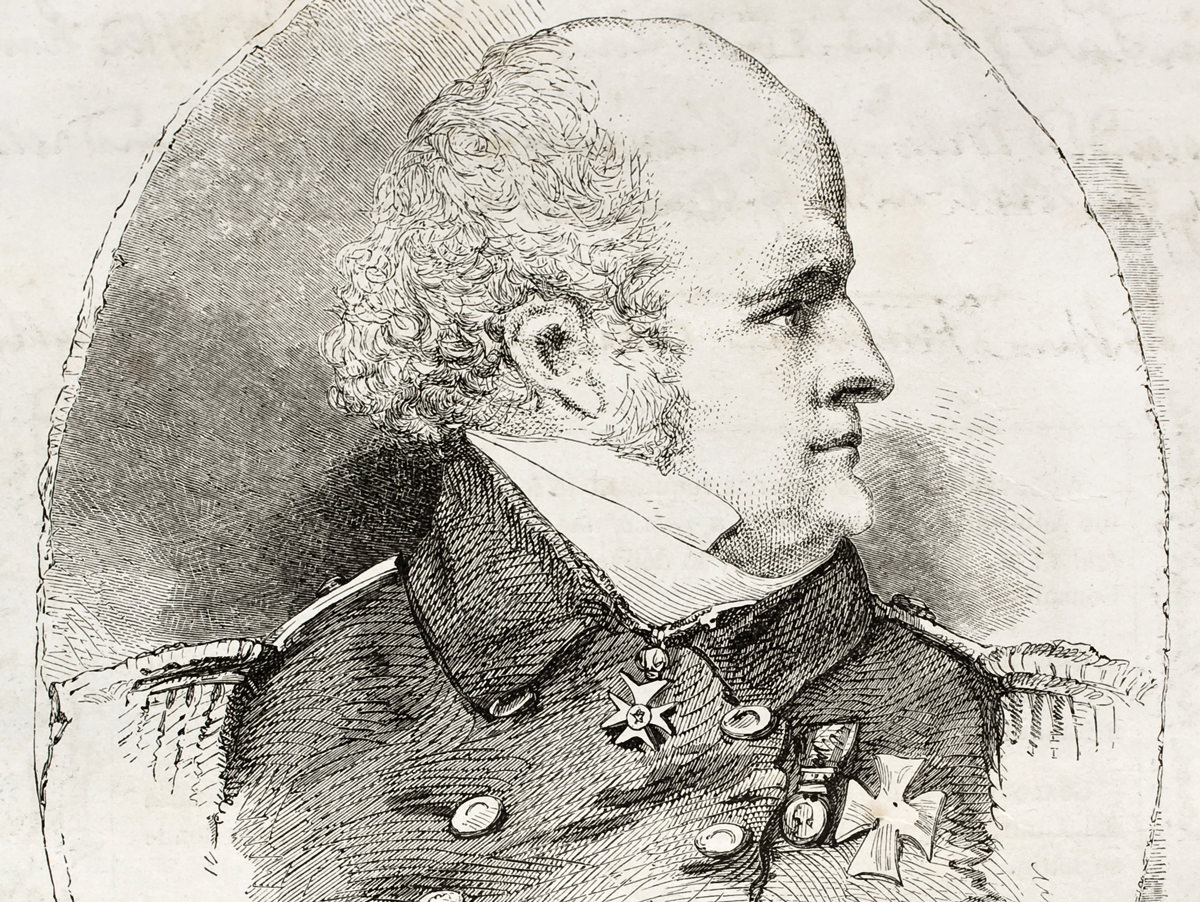 Race to the South Pole

The race between the British explorer Robert Falcon Scott and the Norwegian Roald Amundsen to get to the South Pole occupies a sad place in history. Amundsen arrived on the Fram with a sled and dogs. Scott sailed on the Terra Nova and then took Siberian ponies and motorised sleds, as he considered dogs “un-British”. Both crews battled against atrocious weather conditions, but Amundsen’s method, which was inspired by the Inuit, proved to be far better suited to the polar environment and on 14 December 1911 he and his companions reached the South Pole. They had travelled 2600 kilometres in 99 days. Roughly one month later, Scott arrived – and saw the Norwegian flag. After this devastating disappointment, the Scot expedition ended in tragedy. None of the expedition members made it back to base camp, while on Amundsen’s side, even eleven dogs survived. Another of Scott’s rivals was Ernest Shackleton. The Irish explorer, one of Scott’s former crew members, set up his own expedition to cross Antarctica from the Weddell Sea. Shackleton’s first setback occurred when his ship, the Endurance froze in the ice in 1915 and remained immobile for a year and a half. The crew set off on foot and were stranded on a remote island until Shackleton set sail in a lifeboat to try and get help. Months later he returned in an icebreaker – an unusually happy end under the circumstances. 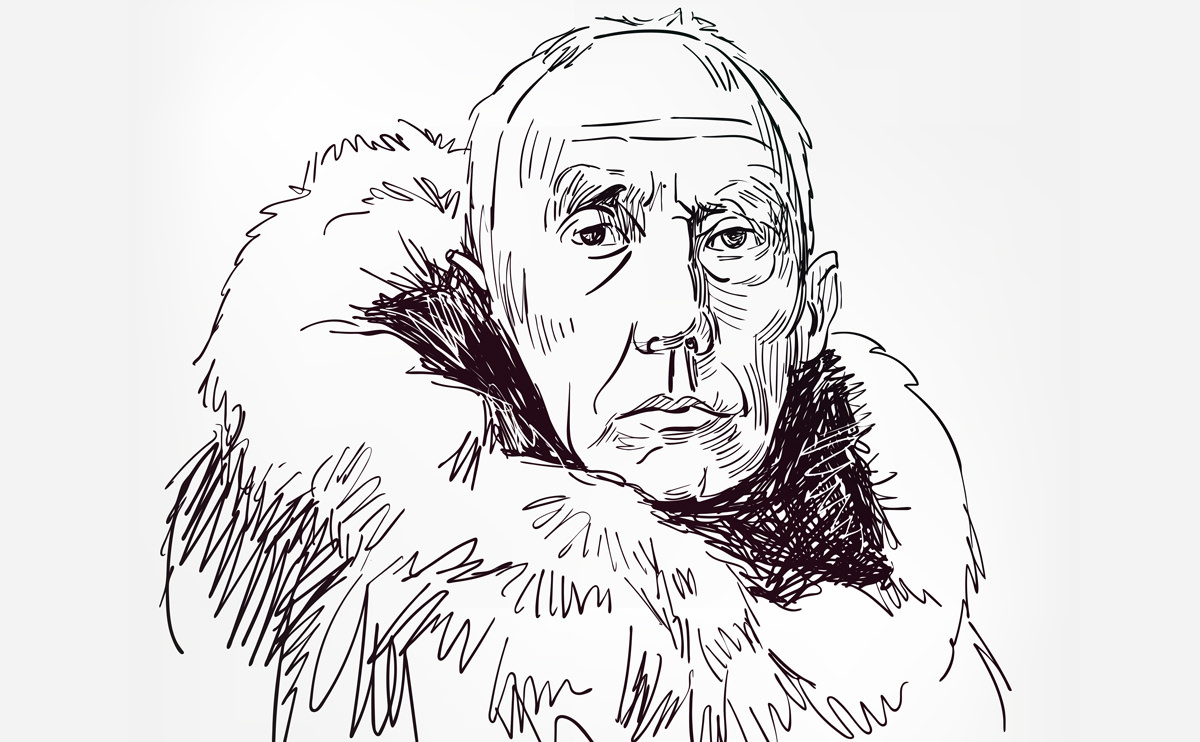 In 1577, Francis Drake set off to become the first Englishman to sail around the world. On his voyage, he realised that Fireland is the southernmost tip of South America. Aboard his main ship, the Golden Hind, the buccaneer enjoyed a lavish lifestyle thanks to his numerous attacks on Spanish vessels, ports and gold shipments. Luxurious delicacies were served on gold-chased silver platters, while violins played in the background. In 1580, Drake returned to Plymouth. His pirate treasures were stored in the Tower of London and the English queen Elizabeth I gave Drake a knighthood, entitling him to call himself Sir Francis Drake. The former pirate also became mayor of his native town, but that didn’t stop him setting sail again very soon after. 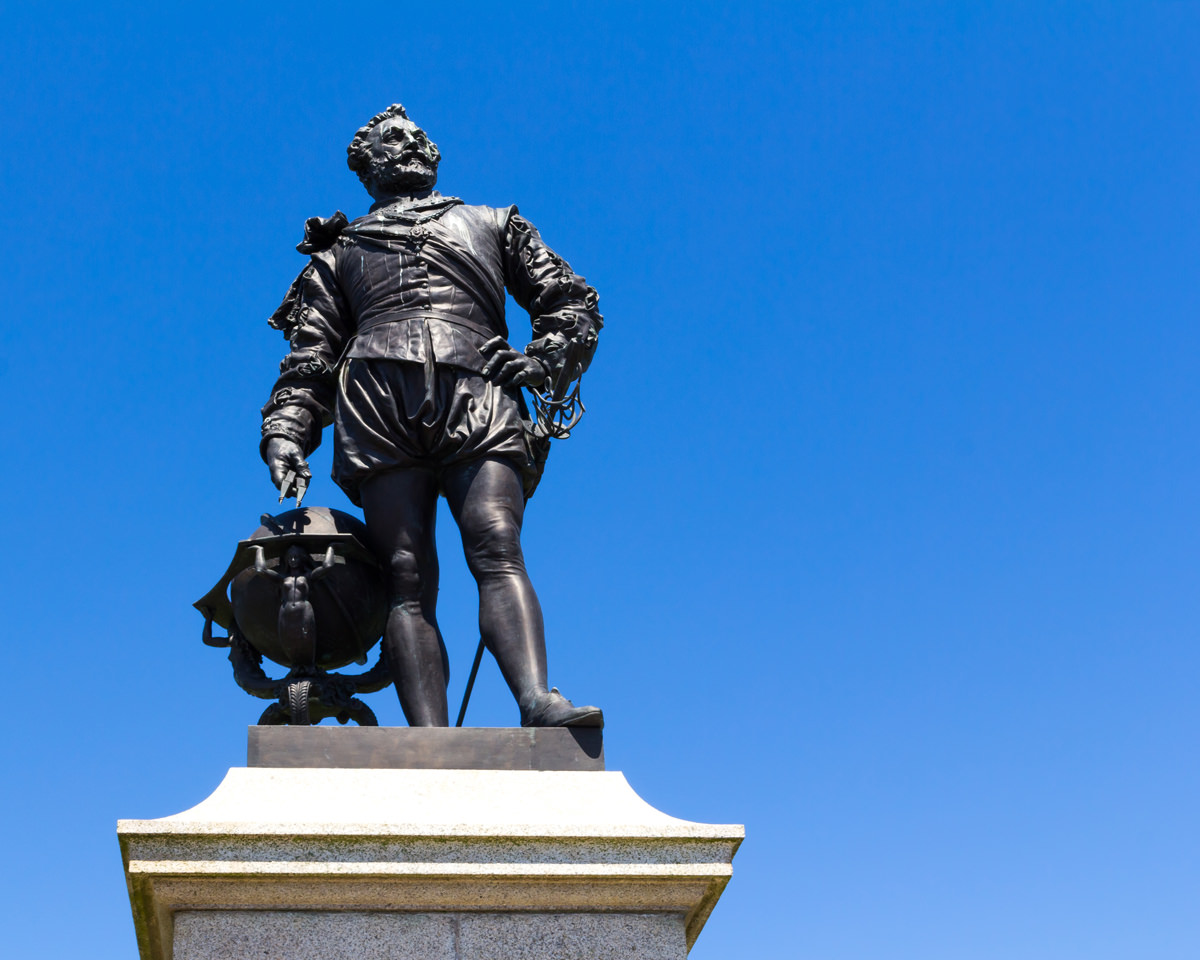