Ships with a past

Think that cruise ships glide uneventfully through life? Think again! Some
cruise ships have histories to rival any ripping yarn. We present three legends
that are definitely not tall tales.

The downfall of the monarchy

In January 1891, the luxurious twin-screw liner Augusta Victoria set off for Egypt, marking the start of the concept of “floating hotels”. Her only fault – two spelling mistakes in the liner’s name, which was cho- sen to honour the German Empress Auguste Viktoria – was rectified in 1897. She served as a cruise liner until 1904 and was then sold to the Russian Imperial Navy. Renamed the Koban, she became a scout ship and was used in the Russo-Japanese War. In 1907, at the tender age of only 20, she was broken up. By this time, the royal successor, the Kaiserin Auguste Viktoria, was already in service. She also had a very chequered history.

After the end of World War I, she was surrendered to Britain and used to repatriate  U.S. troops. She was then chartered to Cunard and operated as a transatlantic liner before finally being sold to Canadian Pacific, renamed the Empress of Scotland and put to service as a cruise liner between the Old and the New Worlds. In 1930, only a little older than the first Augusta Victoria, she made her final voyage and was sold off for scrap. The empress she was christened in honour of, the real Auguste Viktoria, died in Dutch exile in 1921. 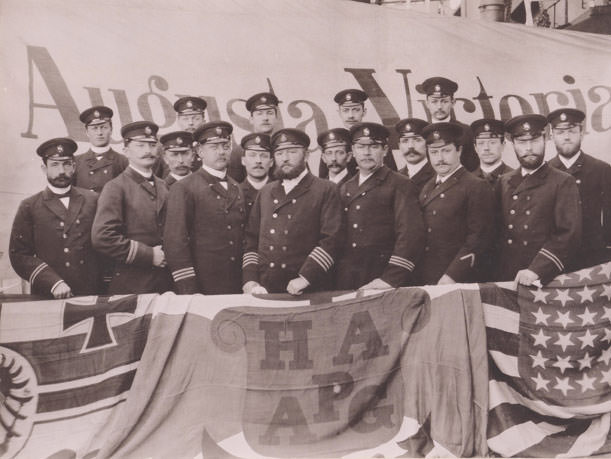 Proud pioneers of cruising: the crew of the Augusta Victoria in 1891

Lavish gold-framed mirrors, marble floors, Swarovski chandeliers: the Phoenicia, commissioned by the Libyan government in 2010 from the French shipyard STX, was to be the epitome of glitzy splendour. The Arab Spring brought Libya’s cruise ambitions to an abrupt end. The ship’s hull was acquired by MSC and completed to a luxurious stan- dard; she was christened the MSC Preziosa in Genoa in 2013. The new owners toned down the ostentatious touches and removed one unique feature of the original design: a 120- ton aquarium with space for six man-eating sharks. This frankly unsettling attraction was replaced with one just as big but a lot more family-friendly: a 120-metre waterslide.

Welcome on board, comrades!

A tragic accident put this particular ship in the spotlight: in 1956 the Swedish passenger steamer Stockholm collided with the ill-fated Andrea Doria. The Italian luxury liner sank off the east coast of the U.S. The Stockholm, built in 1946 in Gothenburg, was repaired and started her second life in the service of socialism: the East German government bought the liner in January 1960 for the princely sum of 20 million Swedish crowns plus one million for the furnishings. She was renamed Völkerfreund- schaft (Friendship between Nations) and was oper- ated by the trade unions’ holiday service and the state travel agency to offer the workers of the GDR socialist holiday cruises around North Sea, the Baltic Sea, the Black Sea and all the way down to Cuba.

In October 1962, during the Cuban Missile Crisis, the Völkerfreundschaft sailed through the U.S. blockade. After this brief appearance on the diplomatic stage, she continued her cruising life, sailing to Egypt as the state ship and generating hard currency in a charter deal with Stena Lines. In 1985, she was sold and replaced with the Arkona – which had enjoyed a TV career as the “dream ship” Astor. Over the following decades, the Völkerfreundschaft became the Volker, Fridtjof Nansen, Italia Prima, Valtur Prima, Athena, Azores and, finally, the Astoria. Following countless conversions, all that remains  of the original Stockholm is the rump, but that’s enough to make her the world’s oldest cruise ship still in service.