Nobody gets past us

Every time a cruise ship arrives at the port of Hamburg, the harbour pilots take over and guide it safely to the pier. hamburg cruise mag joined them on the bridge of Mein Schiff 1.

An hour before, the two pilots set out to meet the cruiser on the Elbe and ten minutes later board the ship through an entrance on the starboard side.

As Donatus Kulisch arrives at his place of work on this June morning the sun is just  a faint glimmer on the dawn horizon – as is usually the case when his shift starts. Kulisch is the vice chairman of the Hamburg Harbour Pilots’ Association; his place of work is the pilots’ station Seemannshöft, a listed red-brick building on a promontory in Finkenwerder. None of the forty cruise liners and commercial ships that approach the port of Hamburg daily gets past him and his  71 colleagues. The pilots have what many of the captains on board these international vessels lack: exact and – literally – in-depth knowledge of port. “We share our information about the volume of traffic in the harbour, the currents and how deep the water is,” explains Kulisch. The sedimentation around the HafenCity and Altona is particularly high. “We receive regularly updated maps from the Hamburg Port Authority,” says Kulisch, pointing at his Portable Pilot Unit, which displays all the relevant topographic maps.

It’s time for the morning’s first assignment. Kulisch enters the tower control room. “So, has she made contact yet?” “She” is Mein Schiff 1, whose arrival is expected at around 6.30 am at Steinwerder Terminal. “She’s just passed the state border,” says the officer of the watch. Standing behind the tower’s slanted 180-degree windows and surrounded by seven screens, radar and radio, he monitors all shipping traffic on the Elbe and in the harbour.

It is now a quarter past five. Together with his younger colleague, Focko Osterkamp, Kulisch

strides to the pier at the station where the pilots’ boat picks them up and takes them to the cruise liner. The sun starts to rise, heralding a glorious morning. The two pilots step onto the bridge of Mein Schiff 1 and are greeted by the captain, Rolf Johannes Noack. Kulisch and the captain chat briefly and conduct what is called the Master Pilot Exchange, comparing the ship’s data and discussing all the details of the manoeuvre. Kulisch takes command of the ship, which is second nature for him. As a pilot, he is a fully qualified captain and spent years as a mariner, working on ships around the world. Noack has a few minutes to sit down with the bridge crew and chat about the docking manoeuvre.

After the brief conversation at the beginning, things take place in almost complete silence: everyone knows exactly what to do, everyone is in their position. The occasional order is given and there’s a brief exchange between the pilot and the captain, but everything is calm, without any sign of tension or stress. It’s the definition of a well-oiled team. The biggest challenge this morning is manoeuvring the ship into the turning circle, which is the only place in the harbour basin big enough to turn the ship into the right position for docking. “Three things are important here,” says Kulisch. “Position, speed control, and the right rate of turn.” He checks the latter on a screen and then describes the basic processes in detail, which for anyone unfamiliar with naviga- tion sounds frighteningly like higher mathematics. By now, a southwesterly wind has picked up.

“As usual,” comments Kulisch. It doesn’t seem to bother him. “Things only get critical at wind speeds of five and higher.” That’s when he recommends bringing in tugs to park the ship. “And above six I insist on it,” he adds. 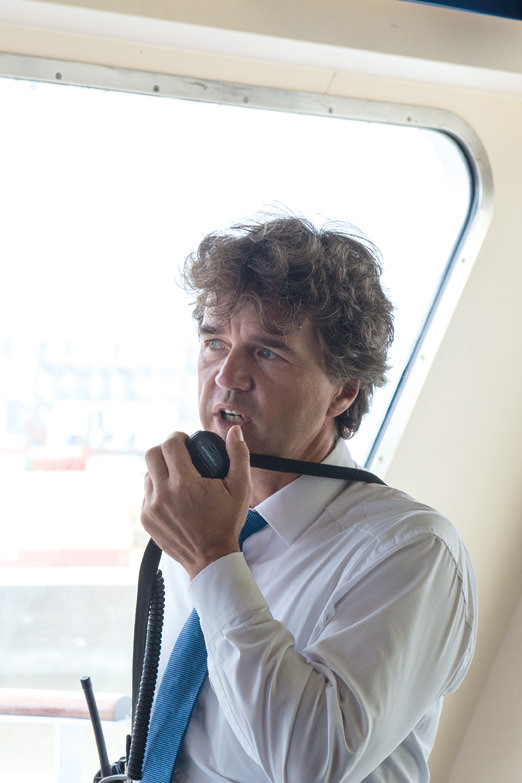 As Mein Schiff 1 docks, Kulisch keeps in permanent contact with the terminal. 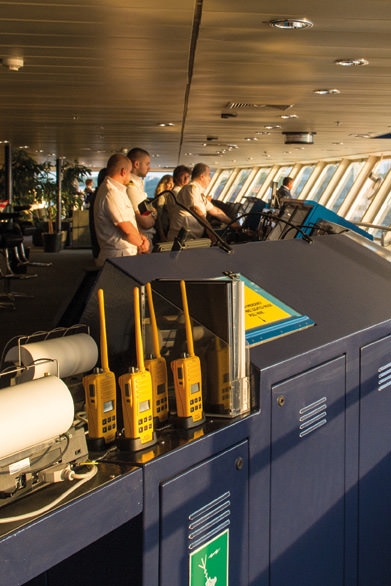 The work on the bridge is conducted in almost complete silence. Everyone knows exactly what to do. 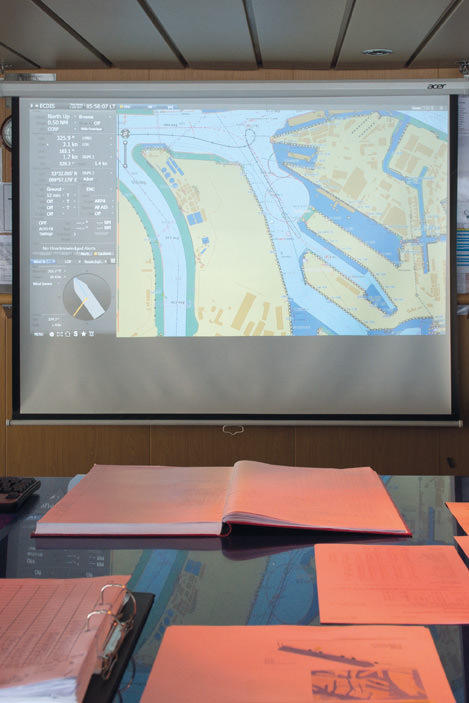 A topographical map shows how deep the water is in the port of Hamburg at this time of day.

The ship begins to turn so smoothly that it is practically imperceptible. Then, abruptly, the captain lets go of the wheel at the centre of the bridge and moves over to the control console on the port side to continue the manoeuvre.

The ship begins to turn so smoothly that it is practically imperceptible. Then, abruptly, the captain lets go of the wheel at the centre of the bridge and moves over to the control console on the port side to continue the manoeuvre. From here, he has a clear view of the side of the ship closest to the pier of Steinwerder Terminal. His first officer communicates with the second officer, who is standing at the rear of the ship, checking how close the ship is to the quayside. The liner has not yet reached its final docking position. There isn’t a lot of space between the stern and the land, and manoeuvres like this are high precision work. The ship’s speed is two knots, ideal for parking.

“This engine is fabulous,” says captain Noack, sounding almost affectionate. While he steers, Kulisch remains in contact with the terminal and the dockhands who will be securing the ship to the wharf. The terminal tells the ship to moor between the metre marks 20 and 284; these are vital instructions for the crew to ensure that the exit is at the same height as the gangway. With only a few metres to go before the big ship slides into position; two boats pop up on the starboard side. “Those are the waste disposal and refuelling ships,” says Osterkamp. “They’re all waiting for us – there’s not a minute to lose.” Captain Noack suddenly shouts out “Garbage!” Whoever this refers to will know that they’re needed, as life on the bridge is ruled by very clearly defined duties.

As soon as Mein Schiff 1 is tied up, the captain calls out “Finito”. His work and that of his crew on the bridge is done. After a long night, they are finally free to grab a few hours’ sleep. By the time Osterkamp and Kulisch disembark it is 6.35 am. Osterkamp speeds off to his next assignment in Harburg, Kulisch returns to the pilots’ station. Rush hour on the Elbe is picking up speed.